To understand why Mada Masr was created, Mostafa explains how most major news media are owned and run by the state (such as Al Ahram newspaper) The rest are privately owned by Egyptian businessmen (such as Youm 7). These dominant ownership patterns affect funding and shape the rhetoric of a newspaper’s editorial orientation.

Mostafa remembers how this became evident at Al-Masry Al-Youm newspaper when the owner decided that the political turmoil of 2013 called for a change in the newspaper’s rhetoric. The owner changed the editor-in-chief and department heads for a new team that would enforce this new narrative, that’s pro-government, on the journalists, many of whom were against the change. Mostafa said the change was dictated from above because in Egypt, “Ownership forces the narrative.”

Mada Masr was launched as an online news website on June 30, 2013, following the protests against the late Former-President Mohamed Morsi and the Muslim Brotherhood that took place on January 23rd, 2013. In reaction to increasing political upheaval, Mada Masr was founded with the goal to cover the story from both sides and report all points of view. They wanted to show the reality on the ground. Mostafa argues that there is a value for the kind of independent coverage provided by Mada Masr:

“My opinion was and still is that journalism coming from the marginalized is what can be trusted.”

The website started as an English news outlet and soon after they introduced Arabic news articles. The team grew and they could publish more. Mostafa first began to work with Mada Masr in June 2014, during the Egyptian presidential elections.

Mostafa claims that journalists at Mada Masr “do not claim we are unbiased, but we at least try to be trustworthy and objective in what we offer to our readers.”

Mada Masr also takes pride in covering sensitive topics that are rarely mentioned in the Egyptian media. For instance, a topic that Mada Masr follows through its coverage is the Egyptian state’s war on terrorism in the north of Sinai, which is neglected by most of the media outlets in Egypt. Other sensitive topics include cases of corruption in the public sector in Egypt.

Mostafa admits Mada Masr cannot and does not want to compete with the speed of other media outlets when it comes to posting news as they do not have enough resources for a larger paid staff. Mada Masr aims to provide well crafted and in-depth journalistic work instead. Through this approach“we want to offer a realistic picture of what is happening, not a flat caricaturish image.”

Mada Masr also prioritizes reader engagement through its membership program that offers different tiers with privileges according to the amount of support paid, ranging from $60 – $2,000 per year. This program creates a space for their audiences to be financial and editorial partners who can share their opinion on what is being published. Mostafa believes the program provides a meaningful way for readers to contribute to Mada Masr’s content and financial independence.

The Mada Masr initiative is a registered media company-owned, run, and operated by a group of journalists. In the beginning the core team was from journalists who used to work at Egypt Independent newspaper, an English-language publication that was issued from the same publishing house of Al-Masry Al-Youm. However, over the last 7 years, more journalists from different backgrounds and professional experiences joined the team, especially with the expansion of the Arabic content. Decisions at Mada Masr are taken collectively by the group.

This ownership model allowed Mada Masr to create an independent structure and working environment free from the dominant political and elite ownership patterns in Egypt that produce partisan journalism. With this model, Mada Masr emerged as an independent and alternative online news source.

When it comes to funding, the Mada Masr team insisted on not being owned or sponsored by overbearing stakeholders so they applied several business models to be sustainable and independent. With the membership program for readers, the members pay a fee and in return get the privilege of critiquing content and reviewing Mada Masr’s future coverage agenda.

“We also have the Morning Media Digest, which is the daily digest for English readers that covers what is in the newspapers, TV talk-shows, and social media. It is in English, unlike the free one we publish in Arabic on the website and social media. Another source are the events. We used to have several events, monthly and annually, which we’re working also as a source of income and ways for community building.”

From time to time, Mada Masr team members attend sessions given by external experts from groups like Arab Reporters for Investigative Journalism (Arij) and International Media Support (IMS) among others to sharpen their skills and stay up to date with the newest technologies and journalistic tools. Mada Masr also encourages workshops beyond journalism, for example drawing on methods from related fields like anthropology.

“Most of our internal workshops were held by individuals we invited like the anthropology professor Hanan Sabea and Filmmaker Nadine Salib.”

Mostafa recalled that they once hired a movie director to help them learn how to direct videos fit for online use, but with an artistic aesthetic. Also, whenever any team member receives training from external sources, Mada Masr encourages them to transfer their acquired knowledge to the rest of the team.

“Ever since its launch, there has been an ongoing discussion on how to organize and to operate work in a democratic style.”

The Mada Masr team is made up of a gender-balanced number of men and women in their 20s and 30s.

The internal dynamics at Mada Masr have constantly evolved since the founding in 2013 to reach a democratic and independent operational process. Currently, the hierarchy starts with the editor-in-chief, managing editor, and lead editors for each workgroup that include the journalists. The workgroups are editorially independent of each other, with each one focusing on a specific topic or agenda.

However, some journalists can be part of more than one workgroup depending on the topics they are covering. Within the autonomous work groups, lead editors and journalists plan the calendar of content (with input from reader members) on how to strategically cover a topic in the upcoming period. Meanwhile, the entire team produces Mada Masr’s daily news digest collectively.

When it comes to Mada Masr’s style guide, the team continuously updates the document with new recommended terminology concerning gender, political titles, and similar considerations. All of the journalists have editing access to modify the style guide and sometimes they hold an assembly among the entire team if a major change takes place.

The Mada Masr team meets each workday to discuss the daily news digest they need to produce and publish. The digest is not a comprehensive compilation of all the current news, but rather a select presentation of the pressing issues that might not be mentioned in other publications. In the daily news meeting, the team also discusses the topics journalists need to produce content about in the next 48-hours.

The planning for more in-depth journalism happens in the workgroups, which meet monthly or bimonthly to plan on the content to work on and set the deadlines. Mada Masr’s visuals and videos are provided by freelance photojournalists and filmmakers to whom they outsource the images and footage needed for the written content.

When it comes to content distribution, Mada Masr is first and foremost an online publication. They use different social media channels to promote the content published on the website.

When the website was blocked by the Egyptian government in May 2017 deeming it inaccessible locally, the team at Mada Masr started using social media differently. Social media platforms were no longer only a tool to promote the website. Because of the block, the team treated social media as a publishing platform.

“After blocking the website in 2017, we started to post directly our content on social media and then post on the website for archival purposes. But also, after a short time, we started to rely on proxy services, so our readers can reach our content directly on the website through a proxy link. We still publish the daily news bulletin (el-Nashra) directly on Facebook because it works much more better in that way, but for the other content we use the proxy tool. It is up to you to add this technical detail.”

After the initial block, Mada Masr also engaged a technical team to protect and recover the website from targeted cyberattacks, which have happened several times since rendering the website inaccessible each time.

Such a team is necessary, Mostafa observes, because “in this day and age, we all live and work in the air, that’s why cybersecurity is crucial.”

In November 2015, journalist Hossam Bahgat from Mada Masr was arrested and detained after publishing an investigative article about the military trial of several officers accused of planning a coup in Egypt. The arrest caused a huge uproar in Egypt and internationally since his arrest was an attack on freedom of speech and this public reaction led to Hossam being released shortly after.

Such policies are needed, Mostafa recounts, because “no group of people coexisting wouldn’t suffer from interaction problems. These problems are the reflection of the imbalance in power and you will always find a person who misuses their privileges.”

For example, he pointed to Mada Masr’s sexual harassment policy that was created in 2017 after a public debate on this topic. At the time, the #MeToo movement was on the rise on social media and a public scandal in Egypt concerning a leftist political candidate accused of sexual harassment uncovered the absence of organizational policies to deal with such incidents in Egypt. 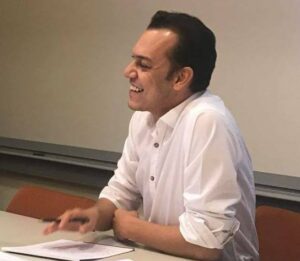 Mostafa is an Egyptian engineer who started his political activism in 2005 when he was a student in university. At first, he only shared political news about Egypt on Twitter, while working as an engineer.

But in 2010 he took his activist passion further: Mostafa started his career as a journalist at Al-Masry Al-Youm, a privately-owned, highly circulated daily newspaper. The newspaper’s editorial positioning was critical, liberal, and independent of the government’s narrative from its launch in 2004 until 2013. Since the beginning of his media activism, Mostafa has focused on creating articles, reports, and videos tailored to the newspaper’s website and his personal Twitter.

Reflecting on his time as a journalist, Mostafa observes, that “in the last years of [former President] Hosni Mubarak’s reign for several complicated reasons, there was actually a much larger space for journalistic work than there is now.”

According to Mostafa, there was a boom in newspaper launches from 2004 until the period after the 25th of January Revolution in 2011.

“There were a lot of new publications that ended mostly because of economic reasons. An example prior to the revolution was the Al-Badeel newspaper that closed down in 2008, although it had promising potential.”

Regardless, Mostafa claimed that there was an abundance of journalistic initiatives in these years. But then, during the 2011 protests until 2013, this started declining. After the protests against the late former President of Egypt Mohamed Morsi ignited in 2013, the editorial narrative of Al-Masry Al-Youm newspaper shifted. Because of this change, Mostafa left to work as a researcher on several short documentary films until he joined Mada Masr in 2014.