Inkyfada was founded in 2014 by a group of journalists, developers, and graphic designers as a nonprofit bilingual media collective. Inkyfada’s reporting is both social justice and gender-oriented and they claim to be the first media platform in Tunisia to write exclusively with gender-sensitive language in French and Arabic languages.

In 2017, Henda joined the Inkyfada team and focused her reporting on social movements and police violence.

During her active years at Inkyfada, Henda used journalism to try to explain to the public what social injustice and discrimination is, why it is so present in Tunisia, and how to fight it:

“Every time we try to think about how to convince people who are not aware of this threat, because [such issues are] threatening the social construct and the peace in the country.”

The editorial focus at Inkyfada is to give voice to marginalized communities and to always contextualize the nature of social injustice, the state of the power, and the need for activism.

Inkyfada aims to support the public interest in Tunisia through innovative journalistic content that helps the readers comprehend and engage in politics that impact their daily lives. Inkyfada positions itself “as a counter-power against all injustices that flow from the corruption and impunity of the powers that be.”

Inkyfada is fighting against political corruption and social injustice by providing citizens access to information that helps them understand problems. This includes focusing on taboo topics that are usually dropped from mainstream media coverage and ignored by the government’s political agenda. For example, in Inkyfada, coverage includes a focus on migration issues that affect many people in Tunisia and usually are not discussed in mainstream media.

Henda explains that Inkyfada aims “to keep people informed about what we think that really matters for Tunisians.”

With this approach, Inkyfada also tries to focus on social media content, which Henda calls “fast food content,” which needs to be strong, simple, and interactive to get the audience to read and watch what is published online.

The main achievement of Inkyfada is that it is still thriving independently from all political parties’ funding, unlike a majority of media in Tunisia. Because of this, Inkyfada is recognized as an independent online news resource for investigative journalism in Tunisia, according to International Media Support (IMS). Secondly, Inkyfada has achieved reaching a large audience with 70,000 to 100,0000 unique visitors per month. Additionally, Inkyfada has a large base of followers on social media with over 114,000 on Facebook and nearly 35,000 on Twitter.

Inkyfada, registered as a nonprofit media organization, is made up of a youthful and diverse team. The hierarchy at Inkyfada starts with the board that includes co-founder Malek Khadhraoui as publication director and the editor-in-chief, followed by a group of journalists – mostly women – who write articles and produce podcasts, and a tech team.

All the staff at Inkyfada are Tunisian, with an age range of 25 to 35 years old. The main nine team members who launched Inkyfada had prior media experience, including some who worked at Nawaat.

Inkyfada is exclusively funded by its parent organization, Al Khatt that offers production and other services so they can pay their journalists without depending on international donors. To be self-sufficient, Inkyfada provides services such as training for journalists, media workshops for youth and civil society activists, and providing website development services for other NGOs or associations.

When it comes to publishing content at Inkyfada, every article and podcast is discussed internally by the board and journalists, then approved by the editor-in-chief for publishing. The decision-making approach at Inkyfada was different according to Henda because the organization includes women in key positions.

Henda describes her experience at Inkyfada, saying, “for me is the first real feminist media in Tunisia. The editor-in-chief is a woman and there are a lot of women working there. They care about gender equality and the atmosphere is safe for women.”

She further stresses that the ethics practiced at Inkyfada are simple and based on respect for all human rights.

Henda describes that media activist websites took the time to adapt to the new era of digital media or web 2.0. Initially, they did not evolve their digital approach but relied on the same techniques they used in 2011 on Facebook in 2017, which proved futile.

“For example at Nawaat, between 2017 and 2018 we were not visible at all because we refused to upload videos to Facebook. We uploaded them on YouTube, so Facebook [algorithms] did not allow our videos to be visible. We also kept writing long articles, which were not what people expected us to do as they do not like long articles.”

Inkyfada embraces the digital sphere by always looking for ways to be more active online, including increasing their published content by introducing podcasts and adding more multimedia content and visuals. For text, Inkyfada journalists kept writing long articles, but they structured and organized them in a way that if the audience read the first two paragraphs they can understand the whole story.

Another approach that appeals to their audience is that they create podcasts for each article so that users can listen to Inkyfada content instead of reading it if they prefer.

During the revolution, one of the challenges Henda faced was when she wanted to create a video reportage on the ground with people in south Tunisia, which was then a military zone. She had several problems with the army and the police that tried to push her away and prevent her from taking pictures when they found out she was working for alternative media that critiques the government.

One of the major technological hurdles news websites in Tunisia face is the constant fear of getting hacked by the government. In addition, Henda describes how online audiences expect that websites should always be updated and redesigned to stay appealing and fit the ever-changing trends.

Inkyfada’s security and media practices have to constantly adapt to constant threats of cyberattacks, changing social media dynamics and algorithms to keep the content of all of their platforms visible. As an online news website, Inkyfada has to always stay active, interactive, and reactive.

At Inkyfada, Henda describes a small and hard-working team. “When you have a small team and you have to be in the media, you always face the same problem that these 4 or 5 people have to do everything at the same time.”

The team members share many tasks from writing articles to editing videos, producing podcasts, coming up with new ideas and discussing them, and reporting on the ground then going back to the office to write.

For the small team operating the news websites, Henda noted, “The lack of resources puts a lot of pressure on the journalists.” 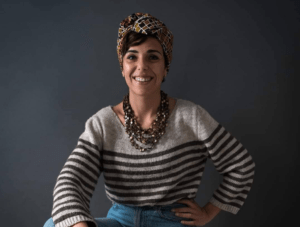 Henda is a graduate of The Institute of Press and Information Sciences in Tunisia. In addition to her freelance work with Inkyfada and Nawaat in Tunisia, she occasionally works with foreign media outlets. Currently, Henda is working on launching the first feminist and queer online magazine in Tunisia that is due to launch in September 2020.

During her undergraduate studies at the institute, Henda felt that she and her fellow students were not being trained to work as journalists, but to be a tool for the government. She describes her studies like, “We were not studying journalism or communication. We were studying techniques to reinforce the dictatorship in Tunisia and to avoid all important subjects in the country.” This approach to journalism education contrasted with Henda’s views on the role of media in society.

She said, “to be a journalist is to care about people and give them a voice, especially women.”

At the end of 2004 and early 2005, Henda started to delve into the world wide web recently introduced in Tunisia. There she started reading about the political struggles in Tunisia on different blogs and started her own career in media activism as a blogger under the name Henda Hendoud in 2007 to talk about freedom of expression and human, women, and sexual rights from her personal experience in Tunisia. Slowly she started publishing exclusive news on her blog. Today, she remains active on Facebook, Twitter, and Instagram.

Between 2007 and 2010, Henda was working as a freelance journalist covering topics related to underground culture and art in Tunisia. In this way, she felt she was shedding light on young artists who have different social views of the country. She also had some experience freelancing with Attariq Al Jadid, an opposition publication, and with the independent online radio station, Radio Kalima. During this time, she also became active on Facebook.

Henda explains,  “Facebook changed a lot in our particles as journalists and as activists. It was an open media where we can write and share our articles and it is fast.”

The year 2010 was a pivotal point in her life. At the time, she was a public activist on Facebook while also working at the pro-regime station Radio Shems FM. The radio station was owned by the daughter of then-president Zine El-Abidine Ben Ali and all the journalists and hosts could talk about was music, nightlife, and other light topics. Such practices, observes Henda, reveal the impact on the audience.

“It takes a lot of time under dictatorship to realize the complexity of the situation, especially that the propaganda is very strong.”

She also describes the impact of media propaganda on the audience, noting that the middle-class population with stable jobs found it hard to accept that they were living under a dictatorship in Tunisia.

In parallel, Henda was always connected to Facebook following news about what matters and voicing her political opinions in different ways like participating in the campaign against censorship in Tunisia in 2010. After the revolution started in 2010, Henda made a change in her career to focus on independent media and political activism full-time.

She recalls that“when the revolution started at the end of 2010, I switched all my career to be a full-time independent journalist working for radio, television, websites, foreign and Tunisian media, and working most of the time with social movements on police reforms against police violence.”

From 2014  till 2018, Henda worked full time with Nawaat, the pioneer independent news media website in Tunisia. Since then, she has been a freelancer at Nawaat and Inkyfada, two of the top independent and anti-status quo media outlets in Tunisia. Henda acknowledges that she has shifted between media outlets over time, and explains that such changing affiliation might not be always political but could also be determined by economic interests.

* Innovative Tunisian media holds authorities to account
* Police harass Inkyfada journalist over security coverage
* Inkyfada and the Panama Papers
* Fighting against the return of censorship in Tunisia: Women striving for freedom of speech and press