Dina and other Iraqi activists who were also working on different social media platforms came up with the idea to found the Iraqi Network for Social Media (INSM) in 2011. INSM is in the process of registering as a non-governmental organization (NGO). INSM was created so that bloggers from all over Iraq can exchange skills and knowledge, and come up with different collaborative online campaigns benefitting Iraq.

Today, the INSM includes around 300 members in the network, around 250 men and 50 women. All of them are volunteers. Dina explains that the need for this initiative is related to the US occupation of Iraq in 2003 and also that the downfall of the regime after was followed by access to the internet in Iraq.

Dina recalls that “there was this prejudice about the Iraqi society being backward, so we wanted to show the positive image of Iraq and its people to counter the negative images broadcasted about war.” The founding of INSM, according to Dina, was motivated by “the need of the Iraqi street to broadcast its voice to the outside world.”

The interests of the media activists at INSM are diverse and include social justice activism, and women’s rights activism. “At the beginning, we suffered for the sacristy of female activists, but currently, more and more women are joining us and breaking the taboos of the Iraqi society,” says Dina.

The collective had excellent digital skills, but INSM wanted to develop their knowledge further and apply it to their online activism in Iraq. One of their early campaigns, Blog with me, visited forgotten historical sites in Iraq and created social media content about each site to revive the public’s memory and attract tourism.

Another popular campaign was organized after the Cybercrime law was debated in Iraq. INSM saw the law as a threat to political communication online, something which they believed was unjust not only to activists but to all internet users in Iraq. The bill was vague and oppressive given the terminology used and the way the government promoted the bill as needed to arrest dissenters. INSM created a Facebook page to facilitate public debate about the proposed law as well as an in-person meeting with stakeholders and policymakers.

Rather than dismissing the proposed law, INSM wanted to modify it in a way that y still ensured protection from hackers and online harassers. Afterward, INSM organized workshops, under the title of “Be safe” for bloggers to enhance their skills and raise awareness about digital security and Iraqi laws concerning media.

In 2011, the INSM team consisted of around 50 media activists from the different regions of Iraq like Kurdistan in the North of Iraq. Today they have more than 300 members. Their ages range between 18 to 50, with the majority of members being below 35 years old. Most of their members are public bloggers and social media activists.

However, there is still a fear of being targeted by the government or extremists in Iraq because of being an activist, which leads some of their women members to use online pseudonyms. The INSM team has diverse political, economic, and cultural interests and this is reflected in its content.

Since the founding of INSM, their activities were mainly supported financially by the Danish organization, International Media Support (IMS). Later on, they would collaborate with local institutions like the University of Baghdad, who provided free locations for training while INSM provided the teachers INSM also received several offers for funding from local political parties, but such funds tied to support these parties in the elections so INSM always refused to comply with any such editorial interference and chose to maintain their independence by always refusing political party funding.

Other sources of foreign funding have included organizations like the United States Institute of Peace (USIP), the Institute for War & Peace Reporting (IWPR), and Internews.

Concerning the hierarchy of INSM, there is the co-founder and CEO, Hayder Hamzoz, and a board of directors followed by the head of departments. The 300 members benefit from INSM’s services, such as trainings and seminars. The members provide INSM news reporting and content verification.

The INSM team received training in 2011 at the Institute for War & Peace Reporting (IWPR) in Iraq on storytelling and at the Media and Digital Literacy Academy of Beirut (MDLAB) in Lebanon, where they learned about media literacy for the first time. When they went back to Iraq, they shared the knowledge they acquired at MDLAB with other activists and with students from the College of Media at the University of Baghdad. The training resulted in growing awareness and interest among students of activism and media literacy.

Dina recalls the long term impact of these training sessions, saying: “Some students (after the training) were so interested in the media literacy they wanted to do their masters around it, and also asked for it to be added as a major subject in the curriculum at University of Baghdad.”

The content INSM publishes on their website and social media is always edited and proofread several times to ensure top quality before being made public by specific editors. INSM always validates any news report using different sources and available articles to make sure their content is accurate.

To facilitate content production, INSM creates a content calendar to make sure they maintain the diversity of topics on their platforms and that no subject surpasses another. The diversity in content and timely scheduled posts make up the primary practices for INSM to keep the audience interested as well as informed.

INSM’s primary social media platform is Facebook. According to Dina, it is the most popular social media platform in Iraq, followed by Twitter and then Instagram. INSM also uses WhatsApp groups for fast internal communication and Google Docs for the internal organization such as sharing, reviewing, and approving the content. Since most of the members are volunteers, they are careful to use free or low-cost tools that can facilitate quality content and collaboration For archiving, INSM uses the Dropbox platform, but also keeps all content backed up on external hard drives and USBs for safety reasons.

Internally they have strict guidelines for reporting and online communication with the audience. The team at INSM created and implemented these guidelines after they noticed some members posting false or incorrect news online.

In Iraq, the Internet and electricity infrastructures are not always reliable. INSM does not have a physical location and the team members mostly connect and communicate online, so the infrastructure problems create a significant setback. To overcome these problems, INSM utilizes several techniques.

For example, members who are in close geographical proximity to each other would choose the best location with a reliable internet connection and electricity so that they could join the online meetings from this common location. INSM also records and summarizes their meetings to share with members who could not participate because of unexpected connection problems.

Another constraint, according to Dina, is the fact that media activists in Iraq are not safe. Because political communication online is criminalized politically and socially, the INSM team practices cybersecurity using encryption provided by open-source software and tools. Concerning content, INSM always discusses the implications of any sensitive content to make a plan and helps any member facing threats because of content INSM published.

Dina notes that in INSM, “several of our team members received death threats (from the government or armed militias) after the content was published. We always helped them move locations until things calmed down, and they were safe to go back home.”

Dina adds that many INSM members also suffered from “digital armies” who would hack, attack, or report their accounts. 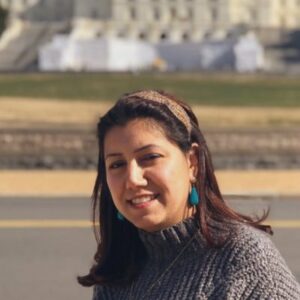 Dina studied French at the University of Baghdad. She did not major in media, journalism, or communications herself but friends in journalism studies inspired her to become a media activist. In the beginning, she used to blog and wrote instinctively without prior training.

She developed her skills as a media maker and activist by taking online courses and attending workshops offered by the International Research & Exchanges Board (IREX) and the United States Agency for International Development (USAID).

One of the causes Dina is most passionate about is the fight for women’s rights, a question she believes is not sufficiently covered by journalists in Iraq.

Based on her experience in formal and informal media education, Dina states that “there aren’t enough resources about media literacy in Arabic, and in Iraq, university education is in Arabic” and that “it should be easier for the students to find resources in their mother tongue instead of translating content from different languages and also from different cultures’ points of view.”

* A network for social media activists in Iraq
* Iraqi bloggers for social change
* Iraq: Call to withdraw the draft Cybercrime Law which would severely undermine fundamental right to freedom of expression